I love high heels. I had no idea where my overwhelming need for them came out. It has only recently been revealed.

Sitting on a lazy spring Sunday on the porch of my parents’ house, my old man (that is how I always call my father) opened the topic in front of my husband and his parents about how my (then) nine-year-old daughter still can not ride a bike. Of course, all in his style: Well, she will not be the dumbest girl in Zagreb?! It is like riding a bike is a matter of intelligence. But every word about his comments is superfluous. I immediately rebelled in my good old custom, and I am sure you are not interested in my high C and the way and words of defense (maybe I should have thought better about advocacy as a profession after all). I snapped: I have suffered enough with your sporting ambitions for such a clumsy and anti-sporting daughter, so we are not going to do that in another generation, are we?

But there is no end when he thinks of something, so he continued, entertaining himself and everyone else around the table with the comment: If she learned to ride a bike, I would buy her a motorcycle, so she could go to the store and so on. There I turned green with anguish: Oh no, you would buy a little girl a motorcycle, and I was not allowed to sit on one all my life! He says: You are different. You have always been wild. You would end up in someone’s garage right away! It was funny to everyone, so he bravely moved on while I was thinking about should I stay or should I go? I stayed. Andrea (that is how his educational sentences always began), I could not make head or tail of you. You never walked on the ground – you were on a bicycle in all possible poses, standing on a seat, on a steering wheel, or you were hanging from a tree! And then it dawned on me! I found out where my need for high heels came out.

High heels are something special, with due respect to ladies who do not wear high heels. I would dare to write a phenomenon of modern society because, from a frog perspective, life on high heels looks much different, more glamorous! This theory is, of course, supported by many photographs representing little girls dressed in oversized mom shirts with hats on their heads, trying to look like a mom. They have too large mom’s high-heeled shoes on their little cute-chubby feet (it is the only part of life when chubby it is at the same time cute). So, it all started a long time ago in mine, and you will admit, in your heads as well. There was some confusion when applying feminist and almost necessary prop, high-heeled shoes, like those when heeled shoes are worn on slightly thicker light socks (or some other), while the rest of the legs are in a tracksuit that is, clearly, slightly compressed at the ankle.

Believe me then, and from that frog perspective, everything looks like one good example of total failure. You are not allowed to do that, even when you go to the dumpster right to throw garbage. Someone might see you, and you certainly do not want that! Such dressing tradition must be eliminated immediately. But yes, maybe we should beware of the fashion plague called Madonna and her not-so-famous beginnings (hand on heart, whose were famous?), those heeled shoes and socks. Fashion often comes back, and we should not need that. We did not even need a new theory that women have proven themselves enough and that we do not ought high heels anymore. Come on that must have been invented by a 175 centimeters tall woman. So us little ones, go figure. I have just so many centimeters with my high heels. But well, maybe a few centimeters more.

I do not give up on my high heels! At least not yet.

BACK TO FASHION CORNER 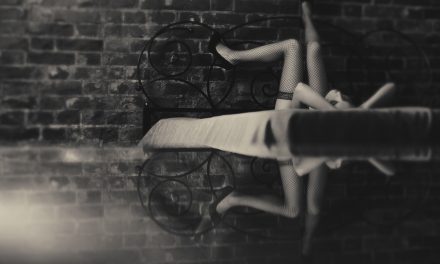 Women should invest in the bed and shoes

No clothes… be careful what you wish for